Warbler Ridge Expands to Over 3,100 Acres

Wildlands News: In late December, Kentucky Natural Lands Trust (KNLT) protected another 54 acres of wildlands along Pine Mountain in Harlan County. The tract expands the Warbler Ridge Preserve to 3,101 acres and links multiple state lands to form 9,000 acres of contiguous protected wildlands. Along with protecting essential forested habitat that sustains a diversity of plant and animal species, Warbler Ridge Preserve is poised to be a notable addition to the region’s burgeoning outdoor economy. 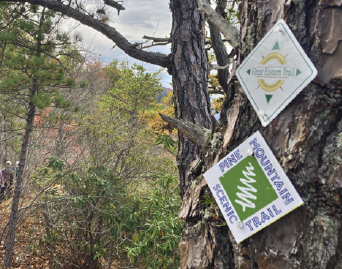 Pine Mountain is a 125-mile wildlands corridor that provides habitat for thousands of species of plants and animals; over 100 of these species are considered rare, some are found nowhere else on the planet. Warbler Ridge Preserve protects important summer and swarming habitat for the endangered long-eared and Indiana bats, as well as unique pine barren habitat. Additionally, the preserve safeguards headwater tributaries to the Cumberland River, a water source for many communities and key habitat for rare fishes, mussels, crayfishes and aquatic plants. The river ultimately flows into the Ohio River forming the fourth-largest watershed on Earth.

With this newly acquired tract, Warbler Ridge Preserve secures nearly 8 miles of the proposed route of the Kentucky portion of the Great Eastern Trail (GET). When completed, the trail will extend 1,800 miles from Alabama to New York paralleling the famed Appalachian Trail. GET is an important outdoor recreation asset for the region’s transitioning economy. KNLT has been a key partner in securing land for the proposed route along Pine Mountain.

Projects like these would not be possible without the support of our donors!
Join our movement and give today: DONATE NOW