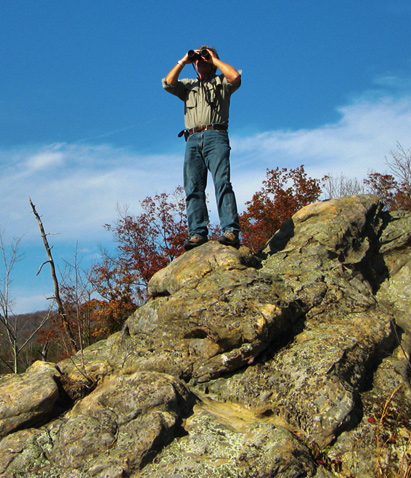 We are a nationally accredited nonprofit that uses a science-driven and community-minded approach to protect Kentucky’s irreplaceable wildlands. Foundational to ecological, human, cultural and economic health, the benefits of wildlands are vast – maintaining natural systems that sustain life on Earth, allowing wildlife (living things in wild places) to flourish not only for humanity but for their own sake, enabling nature’s recovery and fostering healthy communities. Since 1995, KNLT has protected more than 50,000 acres of wildlands throughout the Commonwealth, ranging from the lush eastern mountains, to the rolling central forests and grasslands, to the meandering western sloughs..

Large, ecologically healthy, and connected landscapes are essential to protecting biodiversity and maintaining ecosystem resilience that in turn safeguards communities. Our approach focuses on increasing and restoring landscape connectivity, and fostering collaboration in ways that transcend arbitrary political boundaries and ideologies. KNLT is committed to fulfilling our mission and advancing the goals in this plan in a just and equitable manner.

1995:
• KNLT was formed by a group of friends and launched a successful campaign to raise the funds necessary to purchase the old growth forest that is now part Blanton Forest State Nature Preserve.

2005:
• KNLT honored David Burns with the first One Square Mile Award for his commitment to protecting the wildlands of Kentucky.

2007-2008:
• KNLT assisted Kentucky Department of Parks in purchasing the 1,027-acre Howard Property as an addition to the Pine Mountain State Scenic Trail.

2013:
• KNLT acquired 224-acre addition to Salt Trace Gap Preserve.
• KNLT began its partnership with the Forecastle Foundation.
• KNLT honored the Augusta Wallace Lyons Family with the One Square Mile Award for their commitment to protecting wildlands in the Kentucky.
• The Indiana Bat Conservation Fund protected over 7,150 acres of bat habitat.

2014:
• KNLT purchase 46 acres adjacent to the Archer Benge State Nature Preserve creating the Hyslope Preserve.
• KNLT honored Thomas Dupree, Sr. with the One Square Mile Award for his commitment to protecting wildlands in the Kentucky.
• The Indiana Bat Conservation Fund protected over 500 acres of bat habitat.

2015:
• KNLT sold 386 acres to Kentucky State Nature Preserves as an addition to Blanton Forest State Nature Preserve in Harlan County.
• KNLT expanded the Pine Mountain Wildlands Project targeting 14 new tracts totaling over 9,000 acres.
• KNLT honored Christina Lee Brow with the One Square Mile Award for her commitment to protecting wildlands in the Kentucky.
• KNLT was included in the Royal Visit activities, and staff had an opportunity to briefly discuss KNLT’s work with Prince Charles.
• The Indiana Bat Conservation Fund was renamed to Imperiled Bat Conservation Fund and was expanded to cover the newly listed Northern long-ear bat.

2018:
• KNLT was honored with the opportunity to hold a retreat at the Rockefeller Brothers Fund’s Pocantico Center in New York. The gathering of KNLT leadership, partners and consultants offered a unique opportunity to review our strategic positioning.

Partnerships are key to our conservation successes. With limited funding for land acquisition partnering and collaborating with local, regional and global organizations is essential to our effort. We have successfully cultivated a strong and wide-reaching group of private, nonprofit and government agency partners.

The Kentucky Natural Lands Trust (KNLT) 2015-2020 Strategic Plan will serve as a guide toward implementing KNLT’s goals for the next five years. This executive summary provides an overview of the Strategic Plan. It is our hope that this Plan will guide us on the path to protecting, connecting and restoring, for current and future generations, all the beauty and benefits of our Kentucky wildlands.

KNLT is a statewide land trust committed to preserving our diminishing natural places, protecting our rich biodiversity and ensuring a future that will continue to inspire new generations of environmental stewards.

KNLT began 20 years ago when a group of friends came together to protect Blanton Forest, the Commonwealth’s largest known old-growth forest. The endeavor resulted in the establishment of a state nature preserve that continues to grow in size with KNLT’s assistance.

Our successes come from a dedicated board and staff, extensive partnership network and committed donor base.

KNLT works to protect, connect and restore wildlands that embody the natural beauty and heritage of our state, from the eastern mountains to the western swamps. Wildlands both sustain and inspire us. They are home to many unique plants and animals that collectively form a living support system that provides clean water to drink and air to breath. Large connected landscapes that protect wildlands and migratory corridors are essential to establishing resilient areas that enable species and natural communities to adopt and survive as climate shifts.

Kentucky is a reflection of the world, a place of amazing biodiversity under intense pressure from natural resource extraction and urbanization. Wildlands are critically important to sustaining local, regional and global communities; they are a foundation and essential part of the transitional economy. We must work to protect our sacred land, air and water. Having lost so much already, it is essential that we protect and steward what remains.

To guide our work and respond to the challenges before us, KNLT has identified the following goals and detailed the strategies to achieve them in this next five-year period.

Goal I: Protecting & Connecting Wildlands
Land protection is KNLT’s primary goal, with an aim to protect large forest tracts and migratory corridors. Our flagship project, the Pine Mountain Wildlands Corridor, remains the key focus, but our efforts continue to expand into other biologically diverse and important areas of the state. We continue to foster and develop essential partnerships locally, regionally and globally. These partnerships are essential in meeting our goals and the conservation needs throughout the region.

Goal II: Steward Wildlands
Protecting and restoring the wildlands is a key goal of KNLT. Our existing land holdings, along with the suite of conservation lands in our major project areas represent core protected areas that must be properly managed, maintained and defended. Threats, such as invasive species, must be anticipated and addressed to minimize impacts to these wildlands.

Goal III: Development
Efforts to date have positioned KNLT for major conservation gains in the near term. These gains depend upon critical development work both to ensure adequate and sustained funding, as well as broader recognition and support. KNLT must maintain traditional operational fundraising and land rollovers to fund stewardship and new land purchases.

Goal IV: Organizational Strength and Conservation Efforts Statewide
KNLT has evolved into a leading conservation organization in the region with a solid foundation of experience and support. The Land Trust Alliance has recognized KNLT as one of the Southeast’s “excellence” programs. KNLT has been key to efforts to strengthen support for expanded conservation statewide. Continuing to meet our mission depends both on fostering organizational strength and broadening support for conservation across the Commonwealth.