This project builds upon the organization’s 25-year history of working to protect Pine Mountain, a biologically diverse and climate resilient landscape that is important to local, regional and global communities. Pine Mountain is a 180,000-acre wildlands corridor running from Tennessee through Kentucky to Virginia. Through public-private partnerships nearly 40% of the mountain has been protected by federal, state and nonprofit conservation organizations. Pine Mountain provides habitat for thousands of species of plants and animals; nearly 100 of these species are considered rare, and some are found nowhere else on the planet.

“The Henry and Delia Blanton Creech Addition was made possible by landowners who believe in KNLT’s mission to protect wildlands and who wished to see their family legacy preserved.” ~ Greg Abernathy, KNLT Executive Director 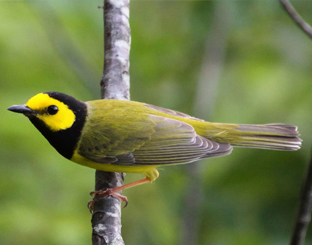 The 139-acre tract is on the north face of Pine Mountain and protects contiguous forest that is known summer and swarming habitat for the endangered Indiana and northern long-eared bats. The preserve will protect the headwaters of several tributaries to the Kentucky River, a water source for local communities and key habitat for rare fishes, mussels, crayfishes and aquatic plants. Ultimately these waters flow into the Ohio River forming the fourth-largest watershed on the planet.

This tract is adjacent to the James Bickford State Nature Preserve, the portion of Pine Mountain Settlement School (PMSS) that is dedicated for its natural significance. PMSS is a longtime KNLT partner that has been a flagship of environmental education since the 1970s. Protecting this tract will enable expansion of school activities and safeguard the forests surrounding the campus.

This addition to Warbler Ridge Preserve also secures an important link in the unfolding Great Eastern Trail. The 1,800-mile hiking trail will ultimately stretch from New York to Alabama, including several sections along Pine Mountain in Kentucky, helping to advance outdoor recreation and tourism, which are essential to the transitioning economy of the region.

This conservation success is made possible by the power of partnership. We are grateful for support from individual donors, foundations, partners and the Imperiled Bat Conservation Fund (U.S. Fish and Wildlife Service, Kentucky Field Office). Together we are making Kentucky a wonderful and wild commonwealth!

In the coming year, KNLT hopes to purchase and protect additional tracts nearby to continue to expand the Warbler Ridge Preserve. Anyone interested in learning more about how to get involved with this project can sign up for our E-news and watch for announcements this fall.