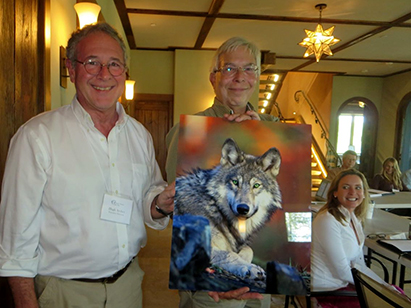 We recently honored Hugh Archer for his 10 years of outstanding service as executive director of the Kentucky Natural Lands Trust. Hugh was a founding member of KNLT in 1995 and became director in 2005. KNLT Board Chair Marc Evans presented Hugh a picture of a green-eyed wolf. This image was originally created for our booth at one of the Festival of Faith events with the theme sacred fire. The green-eyed wolf is an illustration of a passage from Aldo Leopold’s Sand County Almanac, published in 1948. One of the sections is titled Thinking Like a Mountain:

“In those days we had never heard of passing up a chance to kill a wolf. In a second we were pumping lead into the pack, but with more excitement than accuracy; how to aim a steep downhill shot is always confusing. When our rifles were empty, the old wolf was down, and a pup was dragging a leg into impassable side-rocks.

We reached the old wolf in time to watch a fierce green fire dying in her eyes. I realized then, and have known ever since, that there was something new to me in those eyes—something known only to her and to the mountain. I was young then, and full of trigger-itch; I thought that because fewer wolves meant more deer, that no wolves would mean hunters’ paradise. But after seeing the green fire die, I sensed that neither the wolf nor the mountain agreed with such a view.”

Hugh truly thinks like a mountain and has long been a visionary of land conservation not only for Kentucky but for the region and nation. It is an honor to have him leading our efforts at KNLT.