Wildlands News: We are celebrating Earth Day with the announcement of our newest preserve. Earlier this spring KNLT protected 269 acres of wildlands establishing the Laurel Gap Preserve on Pine Mountain in Whitley County. The new preserve is within one of the most remote stretches of the mountain along the Kentucky-Tennessee state line. Laurel Gap builds upon a network of more than 8,000 acres of connected conservation lands including several KNLT preserves and Archer-Benge State Nature Preserve which was established in 2012 via a partnership between KNLT and the Office of Kentucky Nature Preserves. 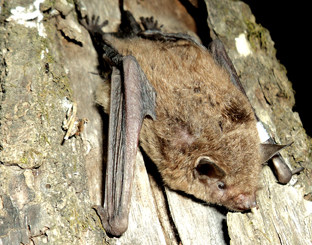 Pine Mountain provides habitat for thousands of species of plants and animals; nearly 100 of these species are considered rare and a few are found nowhere else on the planet. Laurel Gap Preserve protects important contiguous forest that is known habitat for the endangered northern long-eared and Indiana bats. Additionally, the preserve safeguards headwater streams of Laurel Fork, a tributary of the Cumberland River with extraordinary biodiversity. This portion of watershed provides habitat for rare plants (e.g. golden club, rock harlequin, blue mountain mint) and harbors populations of the federally endangered Cumberland elktoe (mussel) and Cumberland darter (fish).

KNLT has a long history of working with local communities along Pine Mountain. This tract of land was acquired from the Henderson Settlement whose mission is to support the community of Frakes and the surrounding region. “Henderson Settlement will use the proceeds from KNLT’s purchase of the land to fund investments in the future of the area including a new local park, building upgrades, housing, and other community support initiatives. We hope to give back to the community a lasting representation of what this land has meant and does mean to all of us.” ~ Pastor John Newman, Henderson Settlement Executive Director

“Through the power of partnership KNLT is safeguarding Pine Mountain, a biodiverse and climate resilient landscape that is essential to protecting all life on the planet.” ~ Greg Abernathy, KNLT Executive Director

Projects like these would not be possible without the support of our donors! Join our movement and give today: DONATE NOW