The eastern spotted skunk (Spilogale putorius), a diminutive, nimble carnivore rarely seen by humans (Video 1), once occurred over a wide geographical area in eastern and central North America. However, its range and population size contracted over the past several decades. The cause for this decline is unclear, and compared to our knowledge about its famous, larger relative, the striped skunk (Mephitis mephitis), we know little about where spotted skunks now live, how they behave, and the size of their populations.

In Kentucky, eastern spotted skunk has a conservation status of “imperiled” – the species is considered to be at high risk of extirpation. Information about where these skunks currently occur in the state is critical to understanding them and managing their populations. Historically, they have been found mostly in eastern counties, including along Pine Mountain.

KNLT wanted to know if these skunks lived in seven properties we have protected within the Pine Mountain Wildlife Corridor (Photo 1). We used track plates to document their presence. We built lightweight boxes (Photo 2) and placed sardines in the back (skunks love stinky fish!). We then sprinkled dark powder on the front end of the floor of the box. The animals that visited the box left their prints on sticky paper near the bait. This allowed us to document where the skunks lived without actually trapping them (Photo 3). 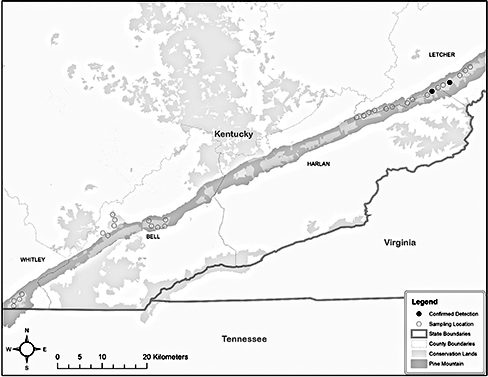 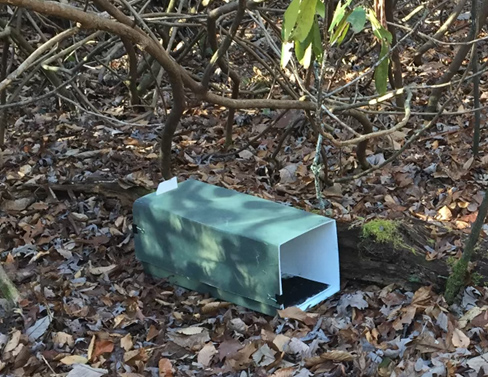 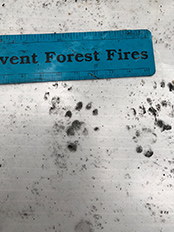 We found eastern spotted skunks at Kingdom Come Preserve and Hensley-Pine Wildlife Management Area. As expected, they were found in habitats with dense understory dominated by mountain laurel and rhododendron and near rock outcrops. Other recent studies in Appalachia confirm spotted skunks are associated with this type of habitat. Scientists hypothesize the dense understory and rock outcrops provide cover from predators. You can read about our study (Detection of Eastern Spotted Skunks on Pine Mountain in Southeastern Kentucky Using Baited Enclosed Track Plates – Anthony D. Lindsay & Sara J. Ash) in the current special edition of the Southeastern Naturalist.

It is difficult to know if we missed spotted skunks living in other areas on Pine Mountain. We suspect that we did. In general, carnivores are difficult to study, and the tiny, quick spotted skunks are no exception! More inventories with remote cameras would help us better document where they live on Pine Mountain. If we found a large enough population to study, research could uncover some of the mysteries of their habitats and behavior.

Scientists from several states including Kentucky are working collaboratively to expand our knowledge of the spotted skunk. You can read about their research, learn more about skunks, and see photos and videos of these stunning animals at the blog below. Check out the videos of young skunks learning how to do handstands! You won’t be disappointed.
easternspottedskunk.blogspot.com