Wildlands Blog: KNLT is celebrating Donna Alexander and her 20 years of service to wildlands conservation. From Blanton Forest to Warbler Ridge Donna has played a key role in advancing conservation along Pine Mountain and throughout the Commonwealth. She has helped protect over 50,000 acres from the mountains of eastern Kentucky to the sloughs of western Kentucky. 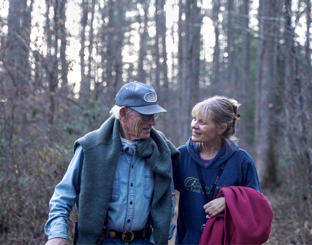 A love of mountains and the outdoors was how Donna grew up – it was handed down by both sides of her family. Her grandfather researched the effects of climate change long before most of the general public was taking notice. Her father tended land in western North Carolina that has been in the family for more than 100 years. Her mother grew up in a household full of every kind of animal imaginable, and her sister has worked for multiple animal advocacy organizations. Family time was spent working on the farm but also enjoying hikes, canoe trips, picnics, and Sunday afternoon adventures down “roads we have not taken yet.”

“All my dawns cross the horizon and rise, from underfoot.
What I stand for is what I stand on.” ~ Wendell Berry

Donna has been foundational to KNLT’s successes over the years providing overall program management including oversight of the Imperiled Bat Conservation Fund (partnership with U.S. Fish and Wildlife Service). Donna joined KNLT in 2001 during our original Blanton Forest protection efforts. Previously, she taught at Knott County Central High School and worked for Appalachian Communities for Children, Madison County Children’s Network, Forward in the Fifth, and Mountain Maternal Health League. She is a 1991 graduate of Berea College.

Please join us in celebrating Donna and her commitment to a wilder and more wonderful world. Cheers to Donna!