A Force for Nature: Lucy Braun is a newly released one-hour documentary about the life and legacies of E. Lucy Braun (1888-1971), one of the foremost ecologists in American history. KNLT is pleased to have played a small part in the film and is honored to be one of the many contributors. The documentary covers Braun’s extensive field research in the mountains of Eastern Kentucky during the 1930s. This fieldwork, and the loss of old-growth forests, prompted Braun to write Deciduous Forests of Eastern North America, and to became a conservation leader.

Braun’s research was pivotal to science and in Kentucky led staff of the Kentucky Natural Heritage Program (part of the Office of Kentucky Nature Preserves) to Pine Mountain. In the mid-1990s State Ecologist Marc Evans was conducting natural area inventories along Pine Mountain and discovered 2,000 acres of old-growth forest near Harlan. This discovery led a group of friends to form Kentucky Natural Lands Trust and work with the Office of Kentucky Nature Preserves to protect the forest. Their efforts were successful and led to the creation of Blanton Forest State Nature Preserve, the largest remaining tract of old-growth forest in the Commonwealth. Lucy’s legacy lives on in KNLT’s ongoing efforts to protect the entire 125-mile Pine Mountain Wildlands Corridor.

“Dr. Emma Lucy Braun was, and still is, one of the most important ecologists in North America. She had a profound influence on our understanding of the role forests and species play in natural communities and in the distribution of species. In A Force for Nature, Meg Hanrahan provides an outstanding look into the fascinating life and many accomplishments of not only Lucy Braun, but also her often forgotten sister, Annette, an important biologist and entomologist and Lucy’s constant companion. The documentary also shows Lucy’s important role in the early environmental and conservation movement as well as highlighting the changing role of women during a time when few women biologists existed.

Dr. Braun had a profound impact on my ecological and biological inventory efforts in Kentucky. Her many papers and books gave me insight and historical perspective and helped me to locate many outstanding natural areas in Kentucky. Her detailed paper on Pine Mountain guided me during my inventory of Pine Mountain and helped me to quickly understand the mountain and its high biodiversity. E. Lucy Braun has been my hero for many decades and I am so happy about the release of this outstanding and important documentary!” ~ Marc Evans, KNLT Board Chair

The film was written, produced and directed by Meg Hanrahan, a co-producer with Voyageur Media Group, a nonprofit organization dedicated to the creation of public media projects about science, history and culture. Voyageur has created a companion website for the documentary with additional information, media releases and photographs, and a link to new educational resources developed with the staff from the Cincinnati Museum Center’s Edge of Appalachian Preserve System. These curriculum materials apply to academic standards in both Ohio and Kentucky. voyageurmedia.org/wordpress/portfolio/lucy-braun/. 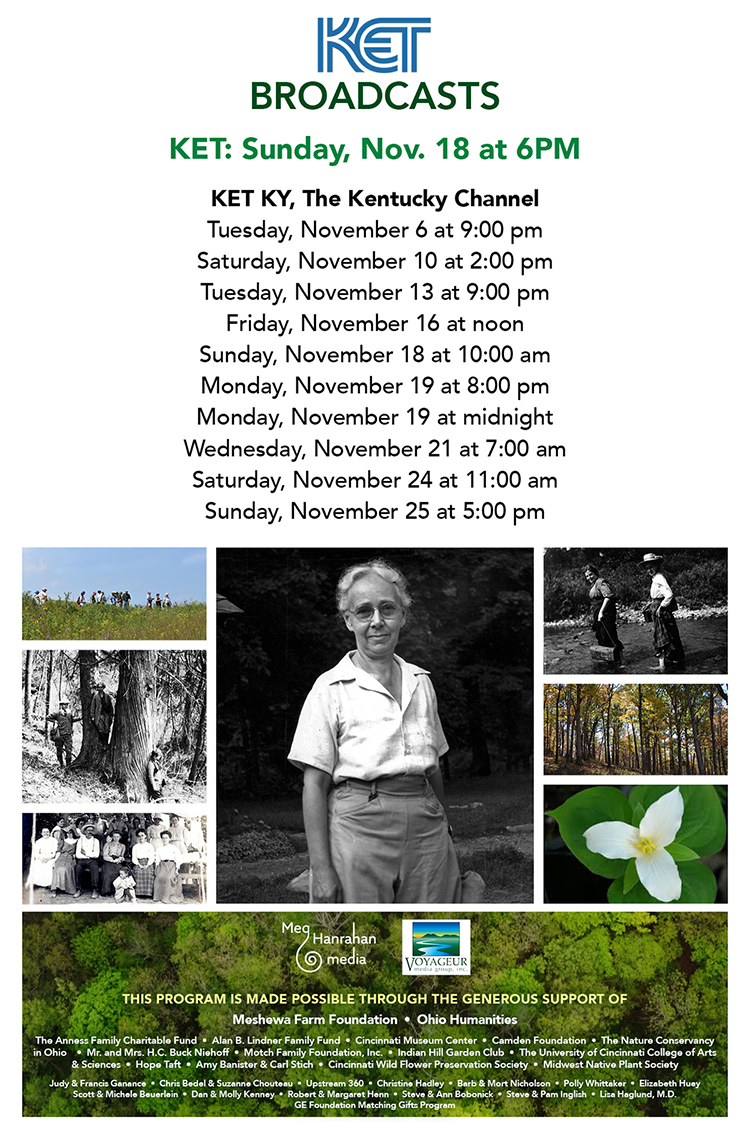