A Weekend on Pine Mountain: A Birder’s Perspective

This fall The Kentucky Ornithological Society (KOS) hosted a meeting at Pine Mountain State Resort Park and I was glad to be able to attend. It was the second time I have attended a KOS meeting at Pine Mountain and it is a location that is important for migrating and breeding birds alike. I was happy to see Kentucky Natural Lands Trust having a presence there as it was important to let birders from across the state know about the work being done to preserve the area for the birds, as well as other flora and fauna. 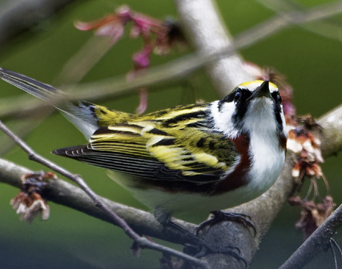 Eastern Kentucky is known for its forested mountains but it is also known for being bereft of birders. Eastern Kentucky is home to twelve of the fifty least birded counties in the USA. So it is important to host meetings in the area to bring birders in. The Pine Mountain Corridor runs through Bell, Harlan, Letcher and Pike counties which have amassed a total of 675 eBird checklists (the number of times someone has recorded detail of a birding trip) and are birded to a greater extent than other eastern counties. In contrast, Fayette County, where I’m from, has 31,606 checklists of which 1476 are mine.

Saturday morning started out as a foggy morning around the resort but one could hear large numbers of Swainson Thrushes and Veery migrating over and a couple of the local first dwellers such as Wood Thrush and Summer Tanager. Our day took us along the corridor to Black Mountain, Harlan County, in search of warblers whose only Kentucky breeding territory is in this region. We failed to locate any Blackburnian, Black-throated Blue, Chestnut-sided or Canada Warblers (other birders located Black-throated Blue Warblers at the park) but we did see Common Raven and Dark-eyed Juncos which are specialist breeders for this area. We also came across the signs of Black Bears and recorded 33 species of birds for that location. 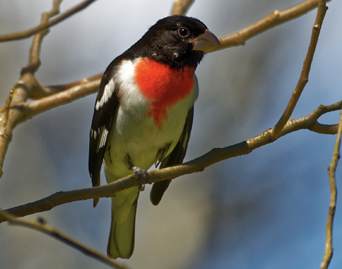 We then moved on to Hawkwatch Tower Rd. in Letcher County, to look along Pine Mountain ridge for migrating raptors. The winds weren’t favorable for a big movement but we did see five Broad-winged Hawks passing through with a number of other migrants.

The next morning at the park was a similarly foggy morning but it broke earlier than the previous day so I managed to see 27 species, including Chestnut-sided and Blackburnian Warblers that I had missed the previous day. We headed to a reclaimed mine area at Boone’s Ridge, Bell County, where we spent a wonderful 4 hours seeing many migrants passing through. We came upon multiple flocks of Warblers and many migrating Rose-breasted Grosbeaks and thrush species. We also had a couple of kettles of Broad-winged Hawks for a total of 23 for the day. The highlights were the warblers, where we had 17 species with three Golden-winged Warblers. Golden-winged Warblers are endangered Kentucky breeders whose summer range is confined to this corner of the state and preserving more land can help protect them.

For the weekend I saw 71 species over Bell, Harlan, and Letcher counties (The meeting as a whole saw 96 species). I saw some amazing vistas and got to see how important this area is to both breeding birds and the migrants that pass through here on their way to and from their breeding grounds. A summary of the birds seen is available at https://ebird.org/tripreport/80659.