KNLT launched a new innovative partnership with Fort Knox Military Installation in 2014, hiring a crew of forestry & wildlife technicians to assist the U.S. Army post with forest management aimed at improving habitat for federally listed bats. Funding for this project was provided through the Imperiled Bat Conservation Fund. With trying to maintain a three person crew and working on a property of approximately 110,000 acres there is plenty of work to go around. In the 21 months of the crew being on the ground we have really been able to see a landscape level impact from our work. 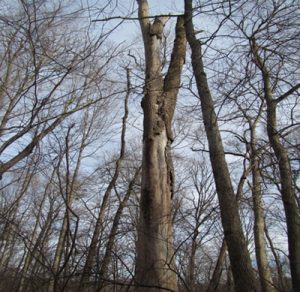 The flaking bark of a dead tree providing roosting habitat for hundreds of bats.

As soon as we were hired we thrown right into the mix and started our first major project, which was a 300-acre unit that needed to undergo some Timer Stand Improvement (TSI). The TSI was aimed at meeting the needs of  federally endangered Indiana bats and federally threatened Northern long-eared bats by providing quality habitat from the flaking bark of the dying trees. As the trees begin to die and the canopy reduces it allows filtered sunlight to reach the forest floor promoting oak/hickory regeneration, which is the main goal of the Natural Resource Branch (NRB) at Ft Knox. The window to successfully complete native TSI is from late June to late November. From July 2014 to February 2016 the KNLT crew completed over 450 acres of Native TSI on the Installation.

Each year as the window for TSI on native species closes, we shift our focus and concentrate more on the exotic/invasive species such as tree of heaven, paulownia, bush honeysuckle, autumn olive, privot, and kudzu. These species are controlled using various methods from injection with a hatchet and herbicide, foliar spraying and prescribed burning. Over the last 21 months we have managed to remove over 415 acres of invasive species across the landscape, including 11 miles of bush honeysuckle removal where we used a chainsaw to cut each shrub off at the stump and sprayed it with herbicide.

(l) Forestry/Wildlife Tech Cody Stephens injects a Tree of Heaven.
(m) A living Bush Honeysuckle holding its leaves while native species have lost theirs.
(r) A fresh cut Bush Honeysuckle with herbicide applied to the stump.

With the TSI work ending for the exotics in late February to early March we hit a 4 month span where we can take a break from TSI and work on some other habitat management activities. Prescribed burning quickly becomes the main topic around the office. There are limited opportunities to conduct a growing season burn in the fall to control the woody plants, thus most of the burning efforts take place during the dormant season of late winter and early spring. The Fort Knox Natural Resource Branch staff work to manage multiple habitat types with fire, from Kudzu patches, to native warm season grasses (NWSG), maintained old fields as well as forested areas. While burning sounds and is fun, there is a lot of planning and prep work that has to be done before the burn can take place. This can consist of invasive species removal, putting in firebreaks, and even cedar/pine removal of old timber harvests. We remove the leftover cedar/pine seed trees from the logging operation in hopes of converting that area back into oak/hickory stands. Since starting our work at Fort Knox we have been able to assist in over 1,000 acres of prescribed burning.

As you can tell most of the work we do is based around the time of year and the season. Most of our job revolves around addressing exotic/invasive issues, native TSI, and a lot of the burn prep. We are still able to help out with other smaller jobs and projects as they come about, some of which include maintaining over 130 acres of wildlife food plots, helping with the deer and turkey quota hunts, stocking trout, improving lake fertility, installing fish structure in the lakes, removing encroaching cedars from the rare limestone/cedar glades, planting NWSG’s on reclaimed tank ground and much more.

In the short time that I have been working for KNLT at Fort. Knox I have been exposed to many aspects of Wildlife and Forest Management and the work that truly goes into each. This experience, this partnership, and the work that we have been able to accomplish cannot be overstated. The opportunity to work in this field and for this organization has and continues to be a priveledge. It has also led to multiple technicians aquiring permenant careers in the fields they want to stay in. I have really enjoyed my time with KNLT at Fort Knox and look forward to continuing the management and what opportunities the future may hold.

“One of the penalties of an ecological education is that one lives alone in a world of wounds. Much of the damage inflicted on land is quite invisible to laymen. An ecologist must either harden his shell and make believe that the consequences of science are none of his buisness, or he must be the doctor who sees the marks of death in a community that believes itself well and does not want to be told otherwise.” -Aldo Leopold

Note: In the spring of 2016 KNLT transferred this successful forest management program to Copperhead Environmental Consultanting. Cody has transferred to Copperhead and the work he and the other forest techs accomplished at Fort Knox will continue. KNLT remains active with efforts in the Bernheim-Fort Knox Wildlands Corridor, working closely with our private, nonprofit and government partners.